National Institute of Mass Communication and Journalism (NIMCJ) students conducted 36th –  Independent Mass Power(IMP). IMP is a student forum for discussions and debates on important topics at local, state, national and international level, and also entertainment, literature and many such areas.

This time NIMCJ went bigger and better in collaboration with Adani Institute of Infrastructure and Engineering (AIIE). One controversial facet of direction of investments of India: ‘Smart city – Is it a smart move?’ was debated by the panellists. The panel consisted of Ms. Veena YJ and Ms. Nirja Jhala from NIMCJ and Mr. Ishaan Shah and Mr. Arpit Shukla from AIIE. The panel also had Dr VM Patel, Principal of AIIE as subject expert, who has a vast experience in the field of smart city initiative.

The debate began with establishment of the concept of the ‘Smart city and development’ according to the panelists. It progressed with considering various dimensions of the topic like Urban extension, Retrofitting, Greenfield development, Sustainability, Energy consumption, Technological developments and status of developed ‘Smart cities’ across the world. Every coin has two sides so be this. The cons like the ignored development of rural areas, abundant technological advancement, privacy breach, corruption was also discussed. The audience actively participated and contributed to the discussion with ideas like aspect of Green city with smartness. Concluding the debate Dr. V. M. Patel quoted “Not only city has to be smart, but the citizens need to be educated enough for the reception of the smart city concept.” He also quoted “Smart city is the need of the hour, but the awareness about the same is must.”

NIMCJ and the IMP team  is thankful to the management of AIIE for their immense support and hospitality in organising the event.

42nd IMP: Safety Concerns: Is the Railways or Public to blame?

From the house of NIMCJ production

Highlights of 41st IMP : Present Education System- Is it beneficial for the Students? 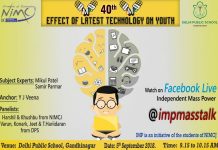 Return of the Infidel: A Review